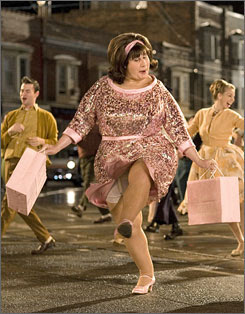 John Travolta’s turn as Edna Turnblad in the film of Hairspray has provided the occasion for more than a little awkwardness in the press recently.

The part, which was of course orignally written for, and embodied by Divine in the oriignal John Waters film, has also been played by Harvey Fierstein, who won a Tony for his version of Edna on Broadway.

“Fox News’ story on this turn of events, back in March of 2006, was entitled TRAVOLTA TO TURN TRANSVESTITE FOR ‘HAIRSPRAY.” The fact that the term ‘transvestite’ is now considered a perjorative (at least in this country) apparently had not reached the editors there. (Generally ‘cross dresser’ is considered a bit less incendiary, but then, it also depends who you ask.)

There have also been more than a few raised feathers given the fact that Scientology has an allegedly anti-gay bias, thus making Travolta a curious choice for this most iconic gay role. The controvery was addressed in a piece in the July 15, 2007 Sunday New York Times. The Times piece, by Jesse Green, is actually very good, and focuses largely upon Travolta’s process as he prepared for the role.

Still, one thing that got my attention in the Sunday NYT piece was Travolta’s repeated line about how “he didn’t want to play Edna as a drag queen; he wanted to play her as a woman.”

This line of course, in countless variations, is exactly the line spoken by thousands and thousands of MTF transsexuals, who, as they come out, want to be seen as women, not as transsexuals.

I said as much my own self when I came out. I wanted people to know that the woman they saw before them was an authentic soul. I still want that.

But I’ll also admit that lots of transsexual women make a big deal of coming out as women, and not as TS, because they look down on cross-dressers, and people doing drag, as individuals somehow not as exhalted as their own selves. It’s a prejudice I hear all the time– including from a number of very visible trans-women in the public eye right now– that they are all for fighting for their own civil rights as gender variant individuals, but at the same time, drag queens, cross dressers and other fellow travelers make them uncomfortable. The division between transsexuals and cross-dressers, sometimes, echoes the old division between transpeople as a whole and the gay and lesbian movement. That is to say, everyone is afraid that these other characters, these “lesser beings” will somehow “make them look bad.”

And so here comes John Travolta, playing one of the most iconic gay drag characters in film history– and what does he want? He wants to be seen as a woman, not as a drag queen. Cause, like, if you’re a “drag queen,” oh that is so very bad, but if you’re a WOMAN, well hey. You’re Good Old Mister Normal.

This subversion of drag strikes me as so nutty I can hardly write about it: it’s like the entire point of drag is to subvert, to make us challenge our ideas bout gender. Plus, have some fun. So instead, here’s Travolta NOT DOING DRAG, but being an ACTUAL WOMAN because its– “ACTING!”

I don’t consider my own life as a woman an act of drag; but it is an act of transgression, I suppose. And sometimes I do think of Ru Paul, who said, “We’re all born naked; everything else is drag.”

Travolta not doing a drag part as drag means he’s doing it as An Actual Woman which means you can Be an Actual Woman and Still be a Man as long as it’s Acting and Not Be Gay.

No wonder Fox news got all confused with its headline. And they’re usually so cutting edge on GLBT issues.

It reminds me of that show He's a Lady was on a few years ago. I got a few tips for passing so that was nice-but half the show was spent spotlighting how macho the Ladies really were.