I Now Pronounce You A Return to the Bad Old Days

There's not been much discussion of racial oppression on this blog, but it need hardly be said that racism and transphobia intersect. Trans persons of color tend to experience higher rates of unemployment and HIV than white trans people. Multiple factors are involved and the demographic reality is complicated.

... and then there's just raw, undiluted nastiness. It's bad enough that a movie like I Now Pronounce You Chuck and Larry relies on nauseating gender and sexual stereotypes, but heck, throw in some yellowface -- why not!

Apparently, just as it's still "comedy" in TV and films to mock trans people or cross-gender expression expression ("hey, let's put a man in a dress for laughs!"), it's still ok to play Charlie Chan. Anti-trans attitudes and anti-Asian sentiments are supported by similar forms of caricature and their continued cultural permissibility. 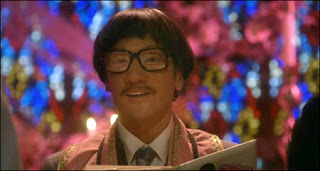 "So... I Now Pronounce You Chuck and Larry was somehow the number one movie at the box office last weekend. I mentioned this movie a few months back, when folks caught of glimpse of Rob Schneider doing some kind of crazy yellowface in the trailer... the word on the street is, the movie pretty much manages to offend anybody and everybody. According to the San Francisco Chronicle:

"Whatever gay stereotypes exist in this movie -- and they probably number in the hundreds -- the writers of the comedy are much tougher on morbidly obese people, hot women, the homeless, mailmen, unattractive women and particularly Asians. Even the band Journey probably deserves a bigger apology from the makers of "Chuck & Larry" than anyone in the gay community."

Note that the producers didn't invite any Asian American groups to check out the movie, which features Rob Schneider as an Asian minister who is a racially offensive Abercrombie & Fitch T-shirt come to life.Schneider appears to be the Jewish/Asian owner of a wedding chapel who married Chuck and Larry. And it's bad. How bad? Bad:

"But the most appalling aspect of "C&L" is Rob Schneider, who plays the owner of a wedding chapel and offers up the most offensive Asian caricature since Mickey Rooney's notorious yellow-face performance in "Breakfast at Tiffany's." What were they thinking? Simple: They weren't."

Never mind the fact that Rob Schneider is actually half-Filipino. Doesn't really seem to matter, does it? Here, he's got some kind of makeup job going on to look super, over-the-top Asian. Recalling Breakfast at Tiffany's Mickey Rooney is an appropriate comparison. Somebody, please revoke this guy's card to the club."

damn. well here's another good reason i try to avoid mainstream culture; this is messed up.

as a kind of antidote, maybe, there's a great documentary i caught on PBS a couple of years ago about Chinese laborers & the building of the railroad in the US:

I could try to say it's an Adam Sandler film - what would you expect other than tastelessness? (And if you've ever tried to watch that crappy sitcom that Kevin James is in you'd know he has no problems with this junk either.) But it's not just that. Mainstream Hollywood movies are chock full of this crap. I've watched various documentaries about minorities in film (hispanics, blacks, etc.) and almost to a T they get this kind of treatment. It's amazing - over 100 years of film making and they still pull this junk.