Monica Roberts has been covering a proposed bill call SB 723; her most recent update is here. It's in the Senate, & what it will do is make it illegal to use a court order about name/gender change to apply for a marriage license. The only reason it's been proposed is to mess with the legal marriages of trans women to men, such as in the Nikki Araguz.

If you live in TX, call your senators now and tell them to kill this bill. List below the break.

There's a new cool survey out for - and more importantly, by - trans people. Non trans people can take it too: it examines attitudes about self, gender, & relationships. The researcher explains:

My advisor and I are painfully aware that most surveys in psychology are not inclusive of—or even recognizing of—trans spectrum identities because we ourselves have trans spectrum identities. Specifically, I am genderqueer and Professor Tate is a transgender woman (who is also genderqueer as butch-presenting). Thus, we do not see ourselves and our experiences represented very well in the status quo of psychology research. We are therefore personally as well as professionally motivated to change the way psychology studies transgender and genderqueer identities. Yet, we need your help to do this well. We need our voices to be heard.

For all the info and a link to the survey.

There are plans afoot for an educational/outreach conference for West Michigan. Here is their call for organizers:

Why?There is a need for education about Transgendered, gender variant, and intersex issues in West Michigan.

How? LGBT and educational related groups will be able to educate & advocate on transgender, gender variant, and intersex issues by creating a conference/awareness week with speakers, workshops, and other activities.

What Can You Do? Email M Kelley at mattkelley39@gmail.com if you would like to get involved, would be interested in speaking, know organizations willing to join the collaboration, or want to contribute somehow to this happening. It is my hope that together we can begin to change West Michigan. 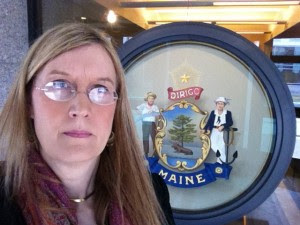 Yesterday, I spoke to the Maine legislature’s Judiciary committee. A bill has been proposed to “exempt” transgender people from protections under the Maine Human Rights Act, which went into effect six years ago. Currently, Maine protects GLBT people from discrimination, and this includes a so called “public accommodations” provision of the very sort that was, in part, the deal breaker in the Maryland law that was shelved last week. (Although I should make it clear that the Maine law has been on the books for six years without problem, and the proposed legislation is to REMOVE the protection for trans people; Maryland currently has no such provisions and the shelved legislation would have put these protections into place.) (You can scroll down for a youtube of my testimony to the committee; I've included a transcript at the bottom of this too.)

There’s a lot to say about my day at the State House, but the thing I was really left with was how much the bill–and the overall acceptance of trans people is about passing.

A supporter of the bill (remember that “supporting” means being against trans rights; “opposing” means being for them) said as much. One of the Senators asked, “If a trans person has had surgery, and appears to be female in every sense, how would you be able to know they were in violation of the law?” And the supporter of the bill–another Republican legislator–said, “Well, if I have no way of telling, the person wouldn’t be in violation.” He then looked around and said, “I mean, if you can’t tell, what’s the difference?”

Cindy Redmond, another supporter of the bill, said more bluntly, “I’m not saying that all transgenders are wacky because they’re not, there’s lots of very nice transgenders,” Redmond said. “But there are a few, and what happens if one of those has used this law to be able to go into a female bathroom for the purpose of perpetration?”

Holding aside the insulting assumption that trans people are somehow more likely to “perpetrate” than straight people, Redmond’s comment here really gets to the heart of the matter. “Wacky” here appears to be a synonym for “not-passable.” Among other things.

I have seen this prejudice against “not-passable” people both within and without the trans community. The fact, of course, is that “passability,” like all forms of “beauty,” is more or less a genetic roll of the dice–it has nothing to do with what is in a person’s heart.

Anyway, EQME did a fine job of assembling its witnesses; while the proponents for the bill seemed limited, largely, to a few right-wing religious nuts–and the governor–the opponents included a Sheriff, a school principal, the father of a 13 year trans girl, and a well-regarded endocrinologist from Boston. I think I was the fifth witness, and the first trans person to come to the podium. The legislators treated me with respect and dignity.

Here’s a copy of my own remarks to the committee. You’ll be struck, perhaps, by their brevity, but we were given a very clear three minute time limit, and my reading of this testimony came out almost exactly at that length.

The committee now goes to ‘working session’, and we’ll see whether the bill makes it out of committee and onto the floor.

(This is part 3 of 4 videos documenting the hearing. Anyone crazy enough to want to watch the whole thing can do so by checking out the videos at the very end of this long post. In particular, part 1 is worth watching; in it, Rep. Fredette proposes the bill, is grilled by the committee; a second legislator speaks for the bill; and then Jennifer Levi of EqualityMaine speaks eloquently in opposition. Her testimony continues in part 2.)

Speaking in Opposition to LD 1046,  ”An Act to Amend the Application of the Maine Human Rights Act Regarding Public Accommodations”  before the Joint Standing Committee on the Judiciary.

My name is Jennifer Finney Boylan. I live in the town of Belgrade Lakes, in Kennebec County. I have been married since 1988, and am the mother of two teenage sons, both of them on the honor roll at Kents Hill School. I am the author of twelve books and have been Professor of English at Colby College for twenty-three years.

I’m also transgender. In the year 2000, in consultation with a therapist, a social worker, an endocrinologist, and my minister, I carefully went through the complex process of going from male to female. It was a terribly difficult journey, but in the end, I was able to complete that transition and at last live my life with honesty and authenticity.

I know that the lives of transgender people can be hard to understand. A report issued last week by the University of California suggests that less than .3 percent of the population of the United States is transgender. With numbers that small, it’s understandable that the issues that trans people struggle with are not easily grasped. But it’s worth noting that transgender Mainers are citizens too. We pay taxes, we do our jobs, and yes, like other people, we occasionally need to use the restroom.

Gender, as it turns out, is complicated. I honestly wish that this were not the case, and that the world were simpler, but it is the case, as scientists and neurologists have made abundantly clear. And the consequence of this fact is that some of us– who already lead difficult and complex lives– need to rely on the rest of you—good-hearted, intelligent Maine citizens—to look out for us, to protect our dignity and our safety.

Fortunately, you can do just that by rejecting this cruel and vague bill, which would make businesses responsible for checking the sex of people using their facilities. By saying no to a law that would marginalize people already at risk for discrimination and prejudice.

In short: Transgender Mainers should not be exempted from the protections of the Maine Human Rights Law, for the very simple reason that we too are human.

(Part I one of the testimony.)

Posted by Jennifer Finney Boylan at 6:01 AM 0 comments

A man whose job it was to make sure men in recovery don't switch their urine for someone else's got fired because he wasn't born with a penis.

TLDEF brought the case, which has now been reported in The New York Times.

THUS: El'Jai Devoureau was fired for being trans. As a culture, we still haven't worked out how wholly incorrect this "genitals at birth determine gender for a lifetime" idea is.