What's wrong with this picture?

So it was 40th annual Pride celebration here last weekend and the San Francisco Chronicle published its usual slideshow filled with fierce and fabulous people having fun at the installation of the Pink Triangle on Twin Peaks, at the Dyke March, at the Pink Saturday in the Castro, at Sunday's parade, at the official celebration party that takes over blocks around the Civic Center.

But guess what was missing? As usual, any photos from -- or any mention of -- the annual Trans March and celebration on Friday. 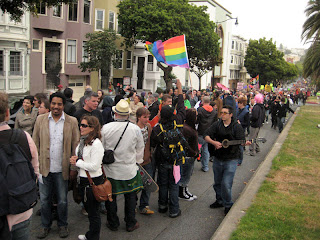 It just would be nice that in one of the most trans-friendly cities on earth, the local paper of record would see fit to mention that there's a T part to LGBT Pride. Especially this year, when the Pride organizers specifically invited several trans contingents to lead off the parade (after the Dykes on Bikes and the "official" floats). Especially when one of the contingents -- the Sacramento Gems -- were decked out in Southern Belle hoop-skirts that proved to be irresistible photo-bait to the folks I saw cramming the sidewalks.

But we did get a crumb. The Chron did focus on a trans couple in a regular Sunday article where couples get to tell the story of their relationship.

Posted by Lena Dahlstrom at 3:55 PM

Just in case you're wondering, the photo was taken on Dolores Street, before we got to Market Street.