Stories from 'Let Us Pee' 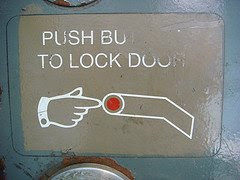 I was touring with a band through Germany when we stopped at a gas station to pee. As the three of us all went into the women's room, the bathroom guardian (presumably there to make sure no one jumps over or ducks under the turn style to pay the 50 cent toll) opens the door behind us and yells something to the extent of "you can't go in here! This is the women's room!" Being a transwoman, I froze and panicked, having never been outed in a bathroom before. But to my surprise, it was my cissexual friend that I had come in with that the man was barking at. "Ich bin eine Frau! Frau! Frau!" she yells back, pointing to her chest. He left before I saw whether he was embarrassed or not. This was the first of 7 times that she was yelled at for using the women's room in the course of six weeks across many western European countries. And I've come to learn that often times, people who clean toilets for a living, are unhappy people waiting to exercise the little bit of power they believe they have. 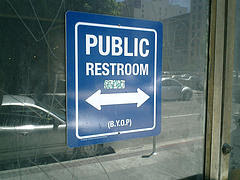 I've been sexually harassed by a woman in the female toilets when (and this was pretty much verified by later events) she read me as trans, and apparently thought it was appropriate to walk up to me, introduce herself, and suddenly grope my breasts.

I don't like to be touched by strangers either

Have a story to share?
Been harassed in a public bathroom because of your gender, perceived gender, gender expression, or perceived sexual orientation? If so send me your story and I will post it anonymously at Let Us Pee. Email it to letmepee@gmail.com