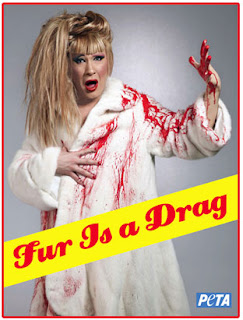 PETA is no stranger to exploiting sexism to push a vegan agenda. While I appreciate the shock value of naked pregnant women locked in pig cages amidst a bustling city, voyeuristic portrayals of under-weight women in lingerie have never struck me as creative or effective. Sex sells mindless consumption. Veganism is hardly an ill-thought choice.

Enter transphobia. Green gossip blog Ecorazzi took no issue with projecting heteronormative anxieties and transphobic ridicule onto the animal rights initiative. In this context, fur is a "drag"--meaning it is bad, and a bloodied cross-dresser is somehow supposed to be quirky or funny. This is all in advertisement for a fashion show where cross-dressers will cat walk fur coats with fake blood and animal traps. The cat walk is just a cruel play on the walk of shame, cloaked by humor and couture no less. Look, it's a tranny with a bloody jacket! Everyone laugh.

Let it be known, I did take a moment to try to find within this ad a social critique of transphobia. Alas, there is none in sight. This is the same simple-minded tactic of PETA: promote the liberation of one group through leaning on the oppression of another. A world of vegans where sexism and transphobia remain unchallenged is no dream of mine.

Hey PETA, stick with throwing paint, hosting demonstrations, and releasing undercover footage. Your posters and commercials are an embarrassment to vegans who support you--myself included.

(Originally posted on The Colonic)

Labels: * by The Colonic, transphobia